skip to main | skip to sidebar

Address: The Spice Monkey is located at 1628 Webster, corner of 17th St at the border of Oakland’s Uptown and Downtown districts in an architecturally delightful former 1930’s art deco tile showroom.

We will identify and announce a non-profit organization working closely with Nepal to support them in there time of need and disaster, and collect donations to send them at this event. 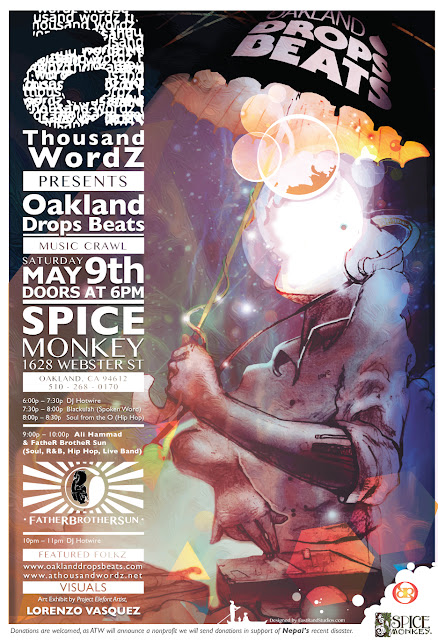 Posted by A Thousand WordZ at 1:18 PM No comments: 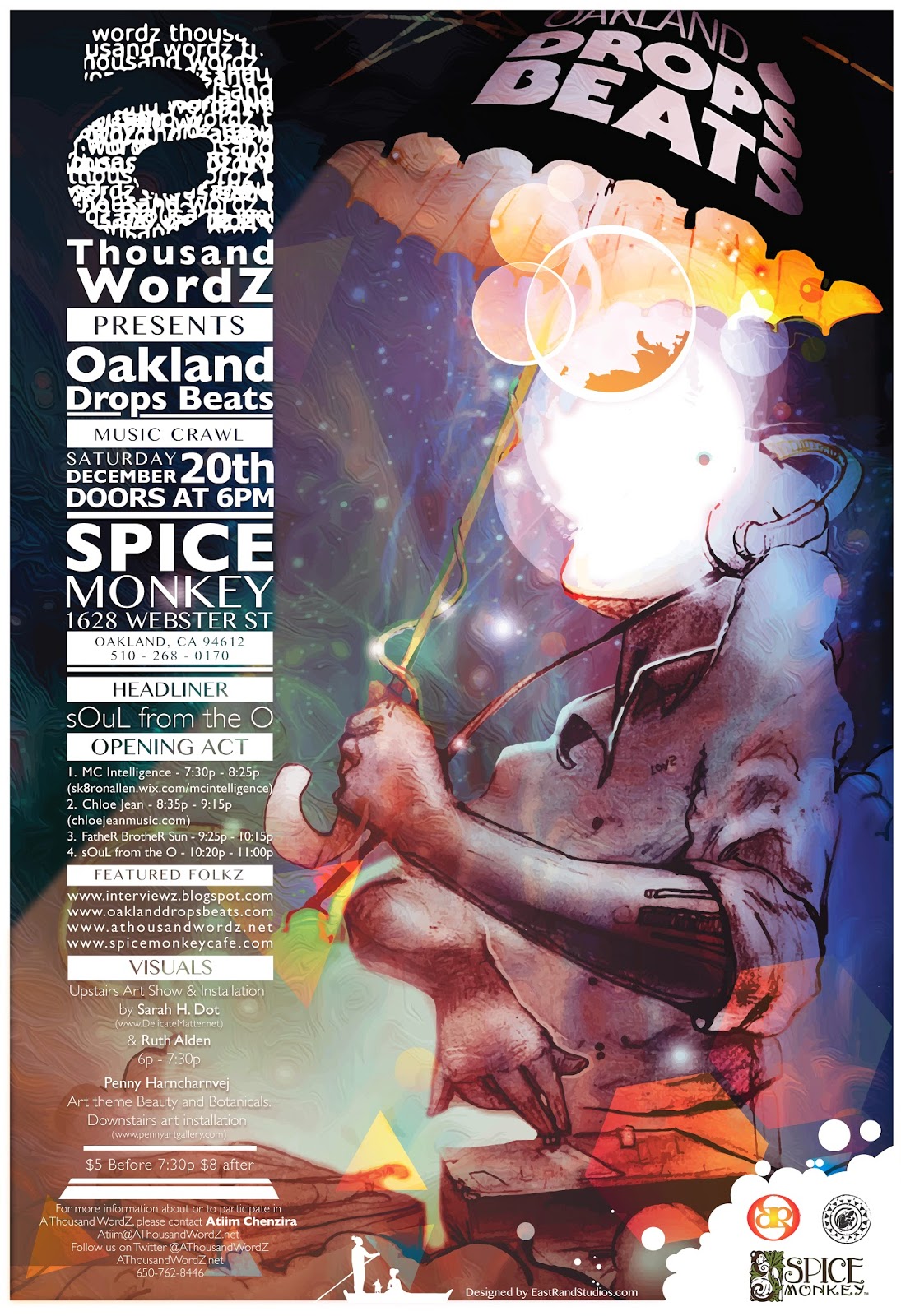 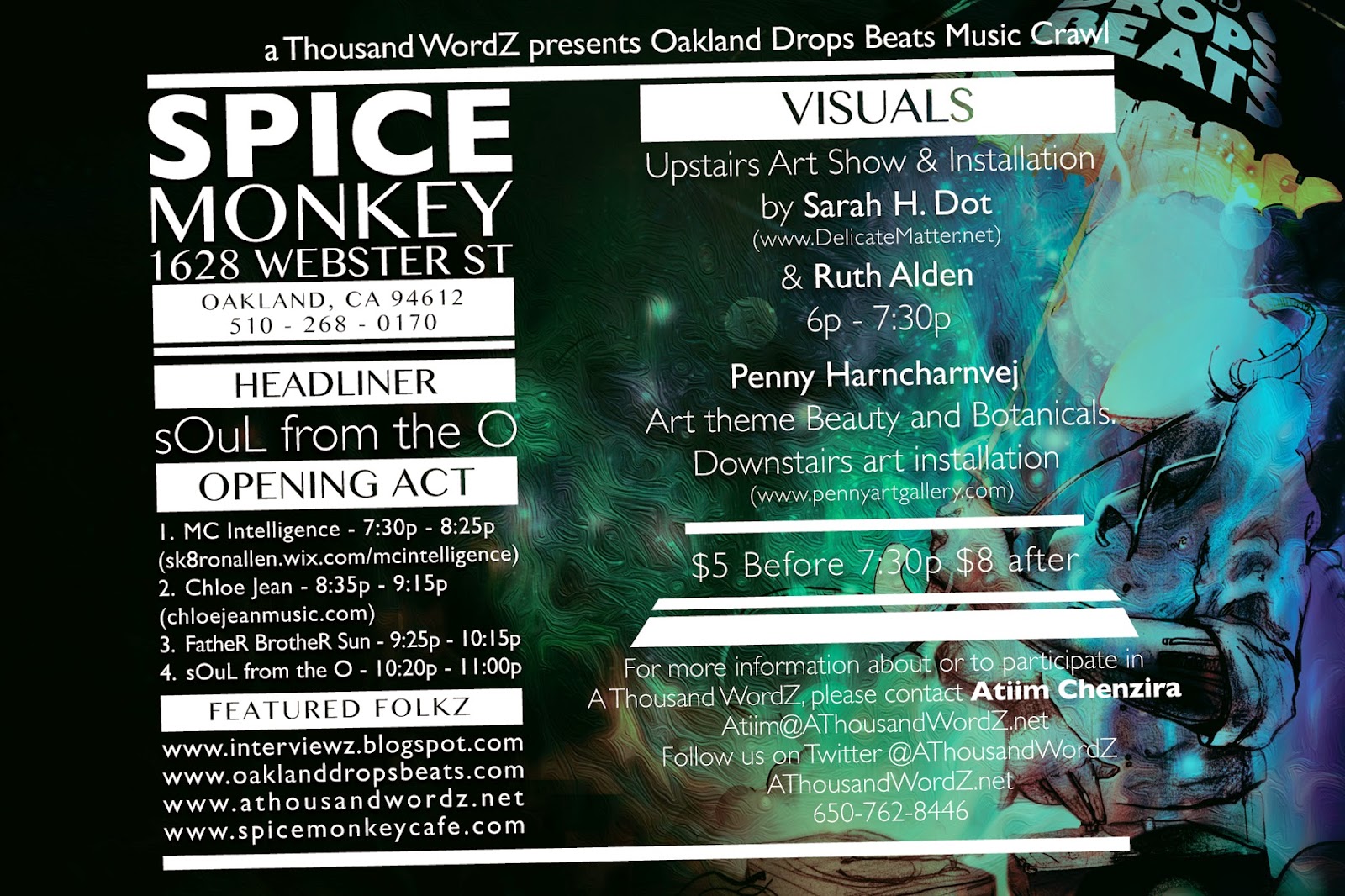 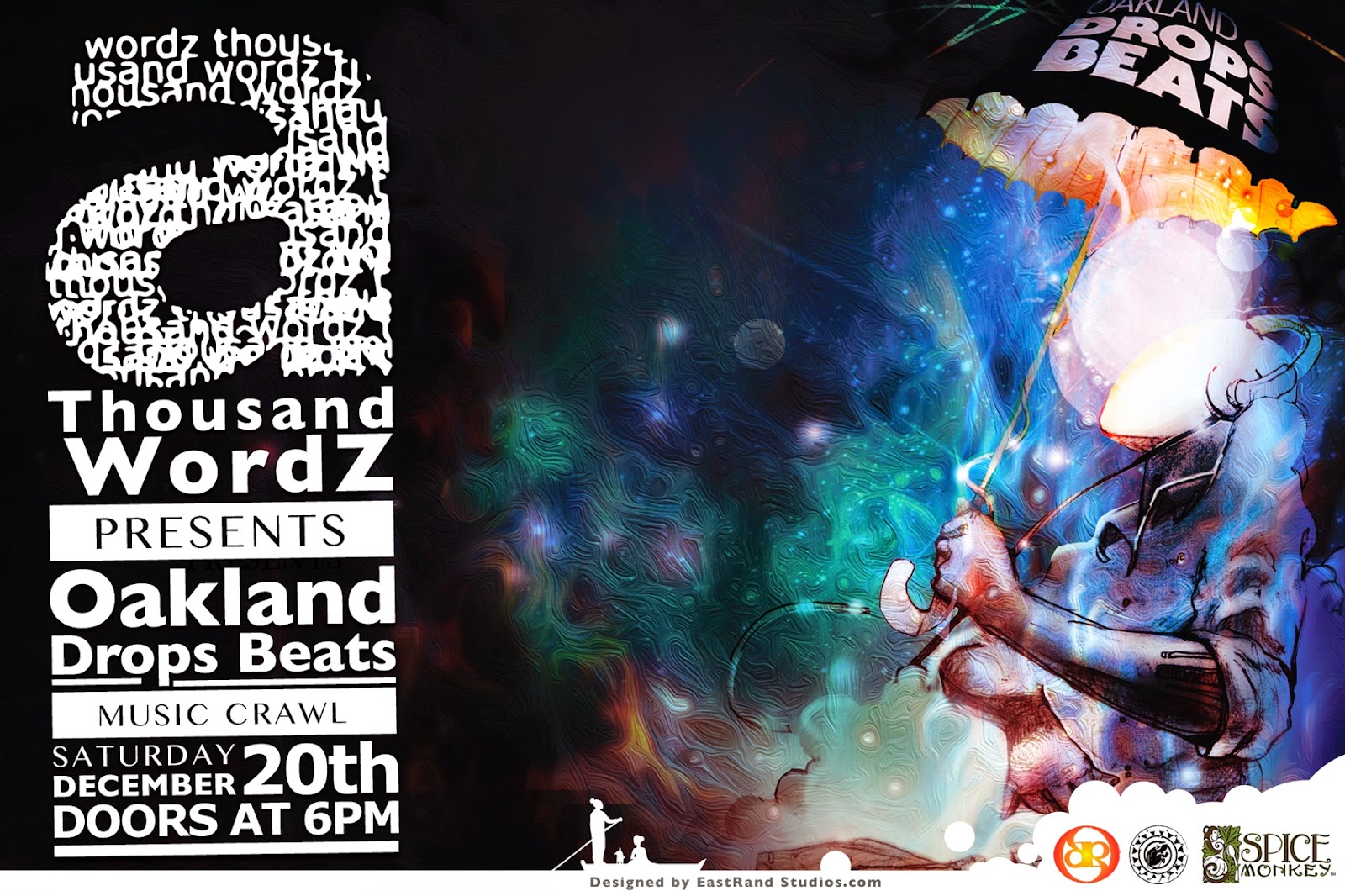 Posted by A Thousand WordZ at 2:03 PM No comments: 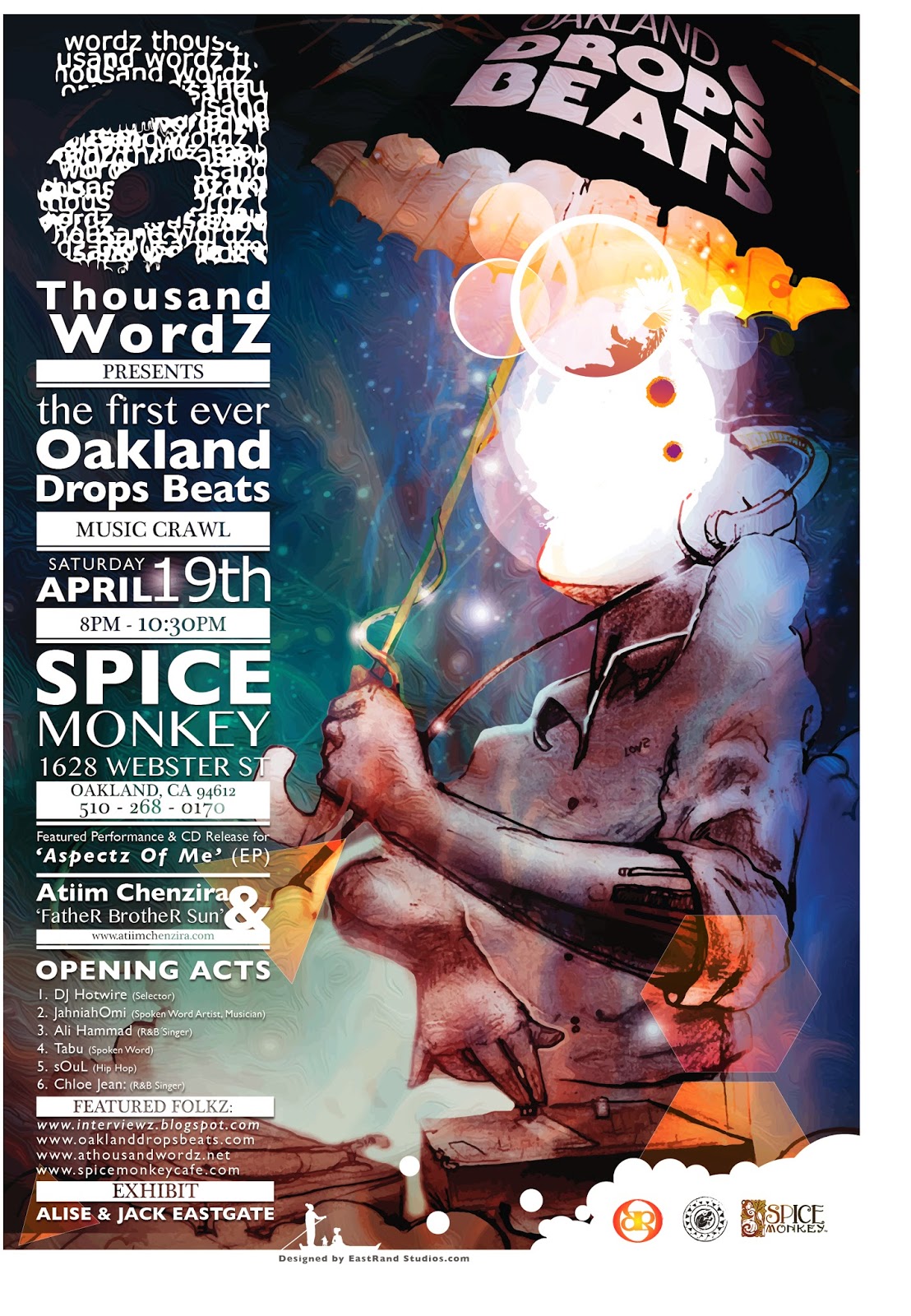 
Posted by A Thousand WordZ at 5:03 PM No comments: 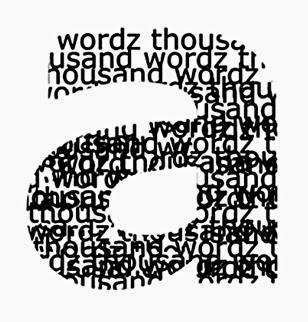 in Oakland, California,
and want you all to come and participate.
This event is part of the larger Oakland Drops Beats music crawl in downtown Oakland.  The first ODB event is happening on Saturday, April 19th and includes 10 venues, over 20 Oakland-based acts, 1 outdoor stage, and lots of community engagement.  FREE. All day. All ages.
Go to www.oaklanddropsbeats.com for more information on the event."

Oakland Drops Beats is a quarterly music crawl that is put on by people who love Oakland and love music, and want more of it.
The first event is on April 19th and will include 10 different venue spaces with 10 different event producers, an outdoor stage on the corner of 15th St. and Webster, and day time performances from Oakland's youth including those from Youth Radio, Bay Area Girls Rock Camp, and Today's Future Sound." 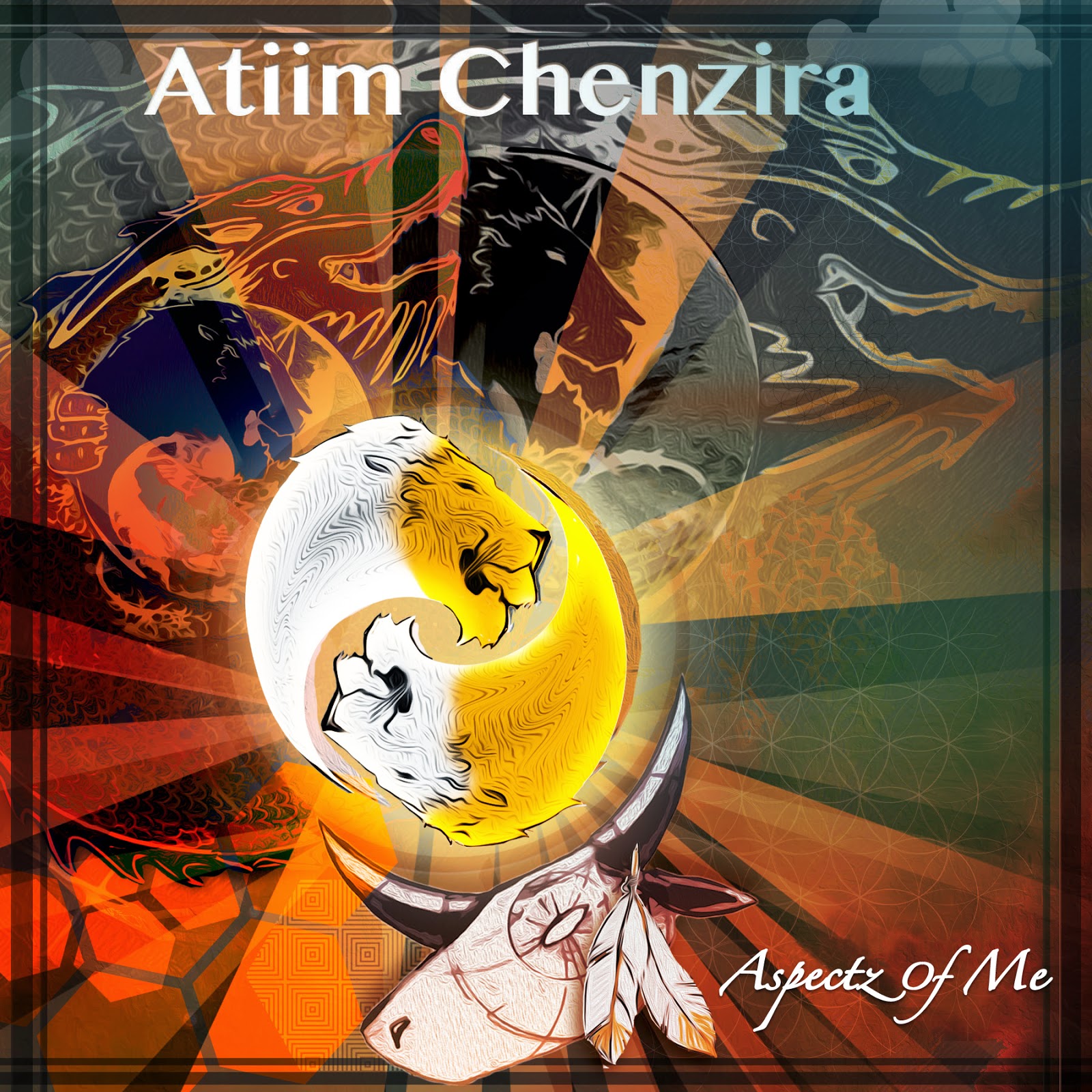 For more information about the artists, go to:
http://Interviewz.blogspot.com

Press
The East Bay Express:
http://www.eastbayexpress.com/CultureSpyBlog/archives/2014/03/24/new-music-crawl-oakland-drops-beats-announces-debut-lineup
Posted by A Thousand WordZ at 10:56 AM No comments:

The 7 year of completion and mastery.

Posted by A Thousand WordZ at 7:48 PM No comments:

This event is a cross pollination of arts from live tattoos, artwork, art expo, vendors, food, and drinks, to give a GREAT place a GRAND OPENING & and to honor the Philippine Island Disaster. 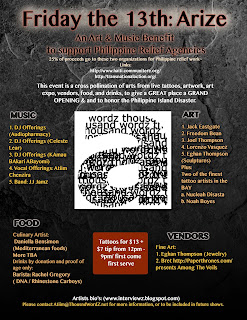 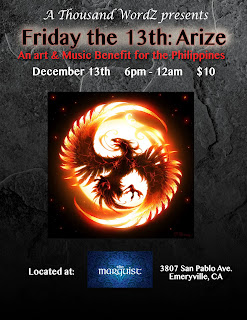 The Phoenix is the symbol of the people who have been devastated arizing from the ashes!

Make a donation to the Red Cross for Philippines relief.

Last Friday, Super Typhoon Haiyan tore through the Pacific islands of the Philippines, leaving behind a scene of destruction and despair. The global Red Cross network is responding to emergency needs in the Philippines with food, water, and relief supplies, and the American Red Cross is lending people, expertise and equipment to this massive effort.

While Red Cross relief efforts are well underway, blocked roads, destroyed infrastructure and downed communication lines are making the response particularly challenging.
The Philippines, a nation of more than 7,000 islands, faces enormous devastation in the aftermath of Typhoon Haiyan that produced record strength winds along with high storm surges. Approximately 10 million people across 40 provinces have been affected with as many as 600,000 people displaced and the death toll continuing to rise.

The Philippine Red Cross has begun distributions of relief supplies and volunteers are packing more supplies to send to all the affected areas. However, delivery of supplies in the worst affected city of Tacloban has been significantly constrained by damage to local infrastructure. Typhoon Haiyan hit the city of about 220,000 people the hardest with a tsunami-like storm surge pushing a wall of water nearly 10 feet high inland.

Specialized emergency response teams from Red Cross societies across the globe are moving into the Philippines to assist the Philippine Red Cross. These include teams with expertise in logistics, disaster assessment, shelter, health, water and sanitation.

AMERICAN RED CROSS RESPONSE EFFORTS The American Red Cross is among those societies helping support the response efforts of the Philippine Red Cross. Four people from the American Red Cross have arrived in the Philippines. These include two people who specialize in telecommunication and who are travelling with satellite equipment, and two others who specialize in disaster assessment.

When responding overseas, the American Red Cross response is different than a typical disaster response in the United States, working closely with the affected Red Cross society who serves as the lead to provide the level of staff support and assistance requested.

People who want to donate to the American Red Cross to support the response for this typhoon can go to redcross.org or call 1-800-REDCROSS.
Tags: Philippines, Typhoon


About the American Red Cross:
The American Red Cross shelters, feeds and provides emotional support to victims of disasters; supplies about 40 percent of the nation's blood; teaches skills that save lives; provides international humanitarian aid; and supports military members and their families. The Red Cross is a not-for-profit organization that depends on volunteers and the generosity of the American public to perform its mission. For more information, please visit redcross.org or visit us on Twitter at @RedCross.
Posted by A Thousand WordZ at 1:02 PM No comments:

Welcome to the Picture!

Browse around and consider making this your homepage...